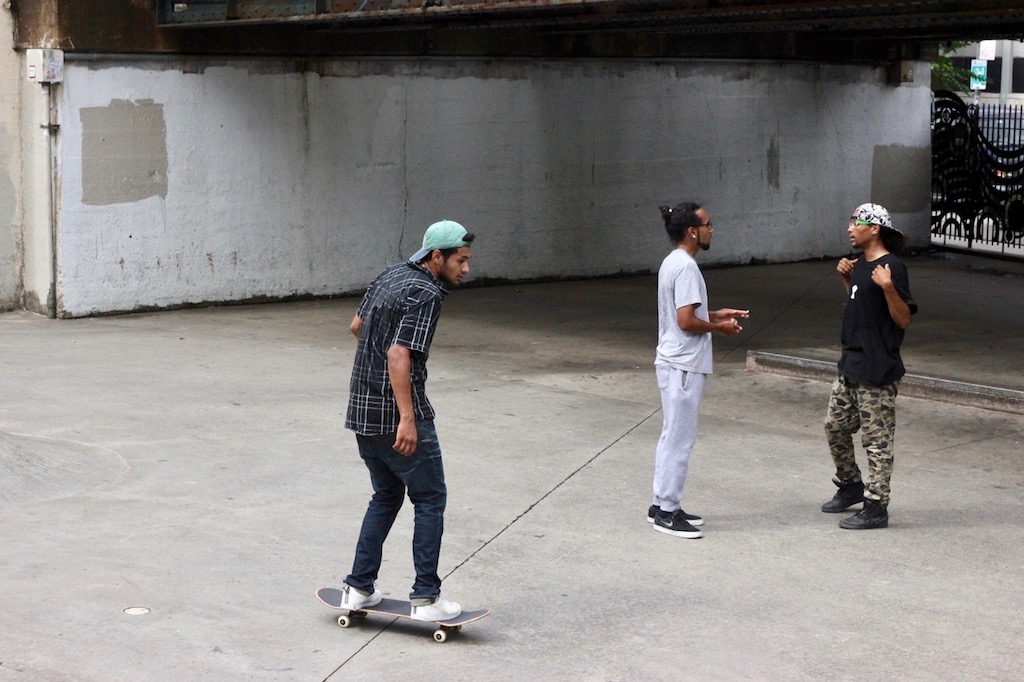 Skaters and advocates push for a Hunts Point skate park

Dylan Avalo’s lifeline came in the form of spam—-an email advertising skate shoes with images of cool skaters gliding along rails and defying gravity. He quickly became obsessed. When his mother handed him money for supplies before his sophomore year of high school in the summer of 2012, he bought a board instead. It helped him fend off thoughts of suicide, which had begun to take hold of him.

Still, though he had found his salvation, he realized that skating anywhere near his Longwood home came with dangers: skating spots were scarce and the streets aren’t always the safest place to be.

“It was just a lot of shit at too young an age,” said Avalo, who is now 20.“Some people don’t feel safe in the area where they usually skate at,” he said. “They like the space, but then there’s a gang that’s always at the corner, chilling by the store—God forbid you look someone in the eye the wrong way.”

At 16, Avalo began to befriend other young men who had created a skateboarding company called P.O.L.I.D.O., or Physics and Other Laws I Don’t Obey. Their hangout was Father Gigante Plaza on Tiffany Street and Southern Boulevard, across the street from Avalo’s house. It was with P.O.L.I.D.O. that Avalo found his next project. He wanted a skate park to be built in the neighborhood, one where young people like him could cope with their troubles on their boards and have a safe place to skate.

Avalo is one of 6.44 million skaters in the U.S., a number that has grown steadily the past three years, according to the Outdoor Foundation. But only 22 of the country’s 100 biggest cities had one or more skate park per 100,000 residents in 2016, according to The Trust for Public Land. New York City placed 77th, with only 25 skate parks serving a population of more than 8.5 million, including four in the Bronx. The closest one to Hunts Point is about an hour’s walk away.

During his sophomore year, Avalo was in a destructive relationship that he says affected his relationships. He had also just discovered that his family had kept a huge secret from him: his godfather and uncle, whom he refers to as his dad, had been diagnosed with AIDS. But there was no one he could turn to.

“Every single place that I could have gone to talk to someone or to cope with what was going on in my personal life” was gone, he said.

Avalo stopped skating for a while because he didn’t have a skateboard. Without that form of therapy, he tried to overdose on prescription medication one night in May 2014. The attempt was unsuccessful. He woke up the next morning in a cold sweat, vomiting profusely.

“I was such a happy person. I had become the complete opposite of that. And that was it. I got a board again and it was done. I did that switch,” he said, pointing to his head, “but I did it up here.”

When young people don’t have safe spaces in their neighborhoods, they tend to feel disconnected from their community, according to Professor Hilary Weaver of the University of Buffalo’s School of Social Work.

“It’s in the community’s best interest to have a place for all,” said Weaver. “If you’re feeling like you have to go far away just to do your thing, that’s very alienating.

“Many people feel that they have very little control in their lives,” said Weaver, adding that “if you can master something, if you can ride, if you could just learn this trick, it’s an affirmation. And it may just seem like a small thing, but it’s something that you can control.”

Danny Peralta, executive managing director at The Point, helped P.O.L.I.D.O. get its initial funding through a foundation and is advocating for a space. With funding from Bronx Health REACH, the skaters hope to transform a small lot next to Barretto Point Park into Hunts Point’s first skate park.

“Being a skater shouldn’t be illegal, but it kind of is,” said Peralta. “In this neighborhood there is no space to do it safely because there’s a lot of traffic, but you can also get arrested for hanging on a rail somewhere.”

During the summer of 2013, the skaters had run-ins with the police in the plaza—one of which resulted in an arrest. In another instance, Avalo says he was sucker-punched when he spoke out against gang members harassing someone. That resulted in a brawl.

The Point and P.O.L.I.D.O. have been in talks with Bronx Parks Commissioner Iris Rodriguez-Rosa to build the new venue. “NYC Parks is committed to offering great amenities like skate parks to the Hunts Point community, as we have done here in the Bronx and across the other boroughs,” said the commissioner in a statement. The empty lot has yet to be transferred to the parks department, and an environmental review will need to be conducted before any determination can be reached on the use of the land. 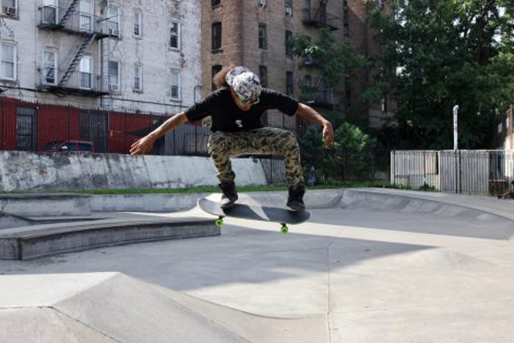 “It’s more like therapeutic now than it is anything else and I still like to have fun while skating, and it’s helped me find friends that actually care,” says Rodriguez. “You make lifelong connections with really great people that also love doing exactly what you love doing.”

Peralta likens the positive effects of skateboarding to the hip hop and salsa movements that germinated in the South Bronx in past generations.

“Let’s stop turning a blind eye to the voice of the young people,” he said. “Give them the autonomy, give them the space to grow and be leaders, and they will do some amazing stuff.