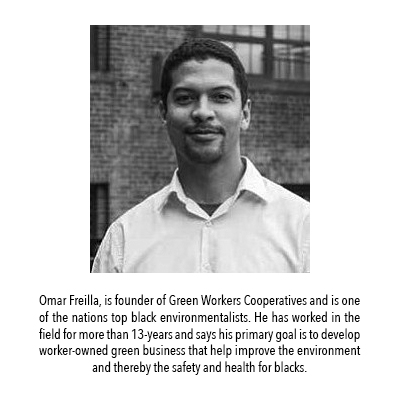 In the middle of political debates on the right and left over whether climate change is real, environmentalists everywhere are organizing in their communities and around the world to make their voices heard and say they will hold their elected officials to the highest standards of honesty, fairness, and integrity when they march on Washington, D.C. on Earth Day coming up in just a few days.

A yearly event, Earth Day is recognized annually and is a time to observe and reflect on the importance of protecting the earth.

In celebration of Earth Day this year, organizers from the Earth Day Network and the March for Science, are co-organizing a rally and teach-in on the National Mall in Washington, D.C.. on April 22.

The day’s program will include speeches and trainings with scientists and civic organizers, musical performances, and a march through the streets of Washington, D.C. The crowd will gather at 8:00am, and the teach-in will begin at 10:00am., according to earthday.org.

Using the teach-in concept deployed for the very first Earth Day in 1970, the rally and teach-in on the National Mall will focus on the need to hold the nation’s leaders – both in science and in politics – accountable for what happens to the earth.

While organizers continue to rally and fight for environmental justice, black environmentalists have been a part of this struggle long before environmental disasters like Katrina and the horrific water crisis in Flint, Michigan occurred. Leaders in the movement like Rev. Lennox Yearwood Jr., president and chief executive officer of the Hip Hop Caucus discussed why the new generation should be concerned about standing up for science when he was quoted on earthday.org as saying, “From George Washington Carver to Mae Jemison, African American scientists have made tremendous contributions to America since its inception. That is why it is imperative and critical for the Hip Hop Caucus and young people of color to not only stand up for scientists, but to ensure that their work is protected and respected for future warming trends and what’s the potential effects on blacks?"

Multiple studies published in peer-reviewed scientific journals show that 97 percent or more of actively publishing climate scientists agree: Climate Warming trends over the past century are extremely likely due to human activities “ according to climate.nasa. gov.

Moreover, the National Association for the Advancement of Colored People (NAACP) Climate Justice Fact Sheet reports that, “78 percent of African Americans who live within 30 miles of a coal-fired power plant will experience illnesses compared to 56 percent of non-Hispanic whites. More so, climate change is known to increase heat related deaths by at least 90 percent for African Americans who live in inner cities.”

Top black environmentalists recognized on BET.com recently have been busy too and their work demonstrates just how important issues related to the environment are important to blacks.

One of those environmentalists is Omar Freilla, founder of Green Workers Cooperatives, who said, climate change should be important to black people because blacks are the ones who will feel the burden of climate change more so than whites. But Freilla stressed that environmental problems have been an issue long before conversations about climate change ever existed.

“Look at the fact that Flint, Michigan is a city that has been in the news because of a decision by its city managers to save money on water,” Freilla said. “They decided to change the source of the city’s water supply, resulting in people being poisoned. Those types of decisions happen all the time and people of color are the ones who wind up losing because the decisions to save money are made on the backs of African American communities, Latino communities, and African Caribbean communities,” he said.

Freilla added there would be no climate change if it wasn’t for the fact that Black communities have been considered expendable for decades upon decades.

“If the Gulf Coast wasn’t seen as a place where you could put oil refineries and not have to worry about the impact of the black communities in the areas, then the oil industry would be completely different from how it is now,” Freilla said. “We probably wouldn’t be talking about the changes on the climate on the global scale because the industries would be operating differently.”

Freilla said one particular level of climate change that should be noted is the effects that wind and water have had on city systems. He stated that New York City and the Gulf Coast, have already seen the effects with Hurricane Sandy and Hurricane Katrina.

“Hurricanes are a lot more intense and when it’s more intense, it means that city systems like roads, transportations, subways and infrastructure gets overburdened and businesses wind up getting shut down due to water and wind damage,” he stated. “There are islands in the Pacific Ocean that are already under water, which has forced people to migrate and move to other islands. The United States is not at this level yet, but within 50 years, that is expected to change and it could be a lot sooner due to the new findings and reports of changes in the climate,” he said.

Organizing on the grassroots level has had an important impact on efforts to improve the environment for blacks. Green Workers Cooperatives is one of those organizations working to make conditions better. Based in based in South-Bronx, New York City, the organization’s goals are futuristic and focused. The organization is committed to the development of worker-owned green businesses to improve the environment in neighborhoods occupied by minorities. It’s a business model that could be replicated in cities all over which are facing the fallouts that negative disruptions in the environment can bring or that could bring, and It’s an organization Freilla founded.

Freilla said the Bronx was considered the “slumps” back in the 1950s and added the neighborhood has now become the dumping ground for a lot of industries that white and wealthier parts of the city prefer not to associate with. He added the only way to change the situation is by building up more worker owned green businesses in communities and getting rid of out of-state business owners who don’t value the health and safety of the people in the community.

“When you have owners who are workers, then that means the owners are living closer to where their facility actually is, which means that those owners are less likely to make decisions that are detrimental to the health of the neighborhood because of their ties to the neighborhood,” Freilla said. “You don’t gas your own neighborhood because you don’t gas your neighbors and you don’t want people talking bad about you at the supermarket.”

Freilla, who is one of the top black environmentalists in the nation has over 13 years of experience in cooperative & green business development. He said he started Green Workers Cooperatives so he could turn the tide on environmental abuses that he saw happening in low-income communities of color.

He added Green Workers Cooperatives believes it’s important for people and businesses to be responsible members of their community and to take care of the earth that we’re all a part of.

“People come to us with all kinds of business ideas and whatever their idea is, our approach is that every business needs to be a green business because if it’s not, then they’re contributing to the problem and making things worse,” he said. 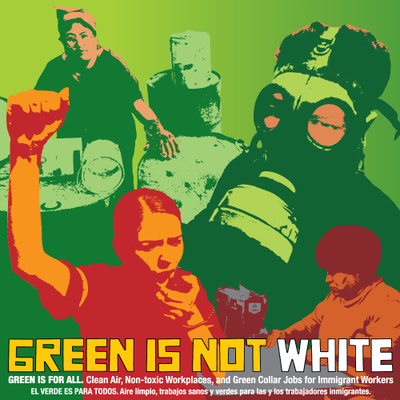 Favianna developed this piece in 2007 in response to the false promises of the booming multi-billion dollar "green" market. The piece is a commentary on what sustainability really means for our communities, our movements, and our environment. Immigrant workers and people of color are often left out of decision making, while working in some of the most toxic industries in the country. Green jobs and healthier communities, can not be just a luxury for affluent whites. They are a necessity for working class people and communities of color.

The words on this piece were inspired by a fantastic article by Van Jones, "The New Environmentalists: How to Make the Green Movement Less White," published in Colorlines Magazine in 2007.