If you haven’t read the brilliant Movement For Black Lives policy platform, stop what you’re doing and read it now.  Produced over the course of a year by over 50 organizations, the platform is the most comprehensive and visionary of any policy platform in use today.

For this reason, Green Worker Cooperatives formally endorses the platform and we encourage all others to do so as well. It is a declaration that the videos of disproportionate beatings and killings of Black people by police that we’ve gotten so used to seeing; posting; tweeting; and marching over, are just the tip of a massive iceberg of structural racism that envelops all the institutions of our daily lives.

It acknowledges that racist violence lives and breathes in the policies that shape our economy; our systems of health care; education; housing; land use; criminal justice; waste disposal; energy production; transportation; parks; you name it.  And it acknowledges that those policies combine with the many other ways people are marginalized, whether by class; gender; age; ability; or sexual orientation, to name a few.

While each section of the platform shines a spotlight on some of the most cutting-edge initiatives happening in the country right now, we’re particularly excited about the section on economic justice and its calls for investment in cooperative development.

At Green Worker Cooperatives, we have always viewed our work developing people of color-led worker co-ops as a critical piece of the movement for social & economic justice. We help build that other world that we all know is possible...from the bottom up.

That work is part of a long tradition of autonomy & self-determination that we’ve always drawn our strength from: from post-slavery Black mutual aid societies to the Black Panther Party & Young Lords Party’s breakfast & health programs, to the Federation of Southern Cooperatives and their preservation of Black farmland, to the participatory governance structure and cooperatives of the Zapatistas.

We’ve been at this work for over 13 years, blazing a trail for a people of color cooperative economy inside a capitalist wilderness, learning and growing ourselves as we help others to launch and grow worker co-ops. Along the way, we inspire others to join us on the trail. We love that we get to create what’s possible. And we love our growing community of fellow travelers. 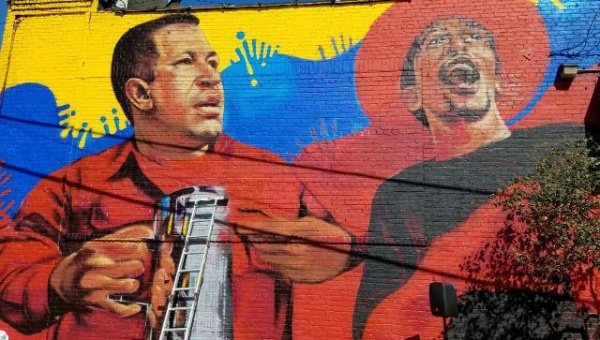 On September 22, 2016, Foreign Minister of Venezuela, Delcy Rodriguez presided over the unveiling of a mural that commemorated the ten year anniversary of the day that the late President  of Venezuela, Hugo Chavez came to the South Bronx.

President Chavez was invited by Congressman Jose Serrano to negotiate a relationship with CITGO,  the American subsidiary of Venezuela’s Oil Company.  The mural is a snapshot of that day in September 2005 when he visited The Point to meet with community leaders, and play “la guira” with Omar.